With three friends [Laurie (Greenfield), Sheena? and Peggy? ] Philip spent one week each year [five days in 1941] ‘cruising on the Thames in hired boats. We know this from a wonderful record in the form of a ‘daily log’ together with coloured sketches of 15 locks they negotiated. These boats were hired at Maidenhead and the journeys were ‘out and back’ over the week. In addition there are some black and white photos highlighting the trips. Philip would have been 28 on his first trip.

Below is a summary but the full story, with all the sketches, can be downloaded here. 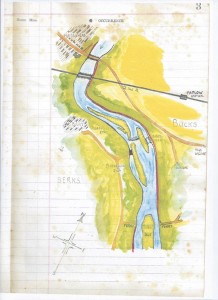 Philip’s sense of ‘adventure’ is beautifully captured in his log and there is much reporting of ‘stops for lunch’, the weather encountered and the occasional ‘luxury’ such as….. ‘returned to Marlow to have tea with the Greenwood family at the Compleat Angler, a much enjoyed occasion’

Clearly they were ‘on holiday’….. 1000 am “late rising; not quite used to this life, still it’s very pleasing to do as you like”.

Time was taken to stop and enjoy their surroundings and walks through woods and games in open spaces beside the river were frequent. It became clear also that not all the locks passed through were sketched. No explanation for this.

On 21st they awoke to a problem… 0800 am;“woke to find the boat at an angle, and that we were hard aground. Bad show. 1000 am; Pushed and pulled, no result; Finally Denny’s strength made it and we set off back to Soning for shopping”. After giving assistance to other craft in similar circumstances Denny records at 1050 pm… “the last flicker of consciousness fled”

This demonstrates another feature of the record. Philip refers to himself in the third person as ‘Denny’ [i.e. a formal and impersonal tone much used in logs on ships at sea? He may have picked this up from his favourite books – ‘Hornblower’, by C S Forester]

For this trip they appear to have brought with them a dinghy [or two?], towed behind, and very simple ‘sails’ [sheets?] which they rigged to the dinghy. Photos show this to good effect! Time spent ‘sailing’ seems to have been a notable difference to the second holiday.

Mention is made of seeing wild life including a swan carrying 5 cygnets on her back, kingfishers and a heron or two but also problems with the camera so no pictures of these.

5.30 pm …. “sailed dinghy with oar and sheet. Quite a success.
8.00pm; went for a long walk through Wittenham woods, getting lost but loving it.
1100pm; Hectic singsong after dinner, and then retired”

It seems as though the motor boat – mc “Sunset” was hired from and returned to Bourne End whilst the dinghy was returned to Rose’s at Maidenhead? Their return to London was ‘by bus’.

After this trip nothing was written until September, 1939 when Philip records:

“On September 3rd 1939 war was declared against Germany”.

We can only guess what went through Philip’s mind at this time apart from spoiled holiday plans. His father was German and settled in England where he ran a small fabric export business. Although by now he had changed his name from Kurt von Akenhausen to ‘Court Denny’, his wife’s maiden name, there must have been some apprehension within the family. We shall never know.

In 1940 his first entry was: “On June 23rd as we were just about to start on our third Thames holiday, France fell, and all leave for AFS was cancelled, as was my chance of enjoying another cruise in mc “Sunset” and we must now wait till next year for the continuation of these holidays”.

This one sentence shows some frustration but some optimism too!

Indeed the next entry starts, “we shall have our holiday this year, 1941, but selling(?) of cruises and petrol shortage means we shall have to be content with un-motored boats, and a holiday spent at some fixed camping ground”.

There were other changes too!

“Peggy is married and must now drop out. So we shall be left as Laurie and Sheena, now married – to each other?; and myself; three this time who will be company because of the friendship cemented during those past river holidays”.

The tone of the next set of entries before and during the holiday was set with Philip’s opening paragraph:

“Since Russia is now helping us in the total destruction of Nazi Germany we dedicate this holiday to them in their colossal struggle. Thus we start our holiday in two punts and the inevitable dinghy, naming them in Russian.”

The humour and imagination must be seen and read without any interpretation or summary to gain the full flavour of this ‘jingoism’!!